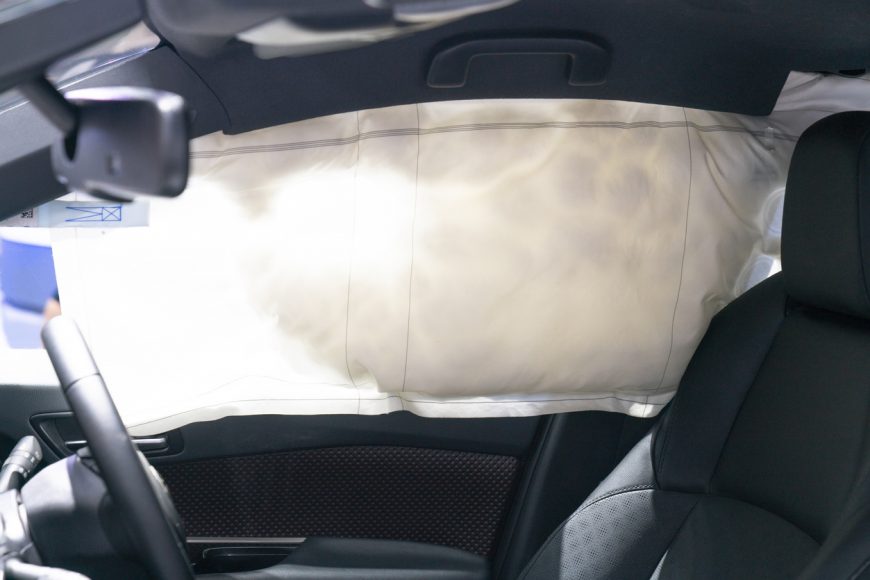 Car Interior Repair After an Accident

When we think about collision damage, we usually think about bent body panels, broken lights and smashed front and rear ends. What about the inside of your car? Between air bags, seat belts, interior panels, and seats, there’s a lot that can be damaged in the cab, even if it remains intact after the accident.

When is Interior Damage Covered by Insurance?

Damage due to negligence is not covered by insurance. This can be tricky when negotiating water damage that is an indirect result of an accident: if the interior is soaked because a window was left open during a storm, it’s clearly negligence. However, if a window is broken in an accident while it’s raining, the damage isn’t preventable. Once the vehicle is brought in for repairs, water damage is again a matter of negligence, since you have a chance to put the vehicle in a building or cover it with a tarp. Most auto body shops will have you sign a liability waiver for on-site storage.

Baby seats and booster seats are not covered by regular insurance but are usually covered by comprehensive insurance, whether the damage was caused by vandalism or an accident. There are a few states that require insurance companies to cover seat replacement, but Wisconsin isn’t one of them.

When it comes to accident repair, air bags are possibly the most misunderstood parts of a vehicle. The powder released when the bag fires is not dangerous, as some people believe. Depending on the bag, it’s either talc or corn starch added to the housing to keep the bag fabric pliable and prevent moisture from damaging the firing mechanism. Cleaning it up is simply a matter of vacuuming out the interior.

Today, cars have air bags in front of the driver and front passenger as well as curtain air bags at every seating position built into the pillars, roof or seats. The Safety Restraint System (SRS) fires the bags based on the point of impact, so the curtain air bags only fire if the vehicle is hit from the side or rolls, while the driver and front passenger air bags only fire in a front-end collision.

Replacement air bags are expensive, but they don’t automatically total the car. A typical replacement air bag costs somewhere between $500 and $1,200 while totaling a car requires damage that would cost more than 70% of the vehicle’s value to repair.

Air bags are extremely safe once they’re fitted, but they represent a major hazard during installation. They’re designed to deploy fast enough that they’re fully inflated by the time your body reaches them during a collision. On average, the bag has just three-hundredths of a second to be in place, traveling at speeds of 60 to 180 mph. If an electric charge is accidentally sent through the contacts on the bag during installation, it could fire prematurely, injuring the person handling it. Once in place, the bag will be inactive until the SRS is activated.

The belt mechanism is designed to let the belt move in and out freely during normal driving, then lock during a collision to keep you in your seat and in the path of the air bag. You may have locked your belt on accident before, but most cars have a second pretensioner that only engages during severe impacts. Once this pretensioner is active, the belt won’t retract, requiring replacement. Even if it could unlock, the webbing that makes up the belt has stretched, making it unlikely that it will hold together in another accident.

While the seat belt keeps you from moving around and the air bags protect your head and upper body from trauma, your arms and legs are still moving freely during the accident. Most small interior parts snap into place so they can break away if struck during a collision. This simplifies replacement, requiring little or no repair of the inner frame to attach new parts.

In-seat air bags will tear through the fabric when deployed, but otherwise, most damage to upholstery and carpets happens indirectly from the accident as bits of glass and other debris cut through them. Like water damage, fabric damage can be hard to prove, as cuts and abrasions are part of normal wear.

Quality Collision Repair is Closer Than You Think

Merton Auto Body has an on-site appraiser to get work approved quickly, and our staff is ASE and I-CAR certified, so we can use the latest techniques to repair every part of your vehicle. Our shop is located in Waukesha County, just a few miles from Hartland, Pewaukee, and Delafield.