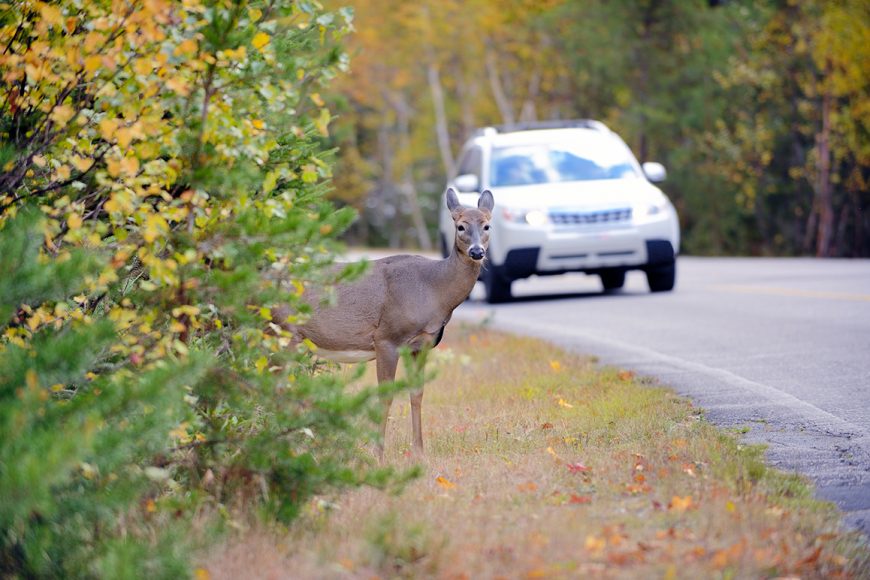 How to Avoid Hitting a Deer

The National Highway Traffic Safety Administration (NHSTA) estimates vehicle collisions with deer account for over one billion dollars in damages, 100,000 injuries and 150 fatalities each year. These tips will help keep you and your car from being part of these statistics.

When, Where and How Deer Appear

Deer are active all year, but they’re most prevalent during migration and mating season, which runs between October and early January. They do most of their foraging at night and are most active during the two hours before and two hours after dawn. That means that while it’s possible to encounter deer at any time, you’re more likely to see them driving to work in the winter months.

Deer travel in small herds and move in a single file line. If you see one deer, there are probably several others very close to that location. Slow down and make sure all the deer have passed.

Those warning signs for deer crossings are there for a reason: they’re placed where the number of deer-related accidents has passed some sort of locally-regulated threshold, usually around one accident per mile per year. The highest collision rates occur in areas with a combination of high deer populations and high traffic, like rural Interstate highways and suburban roads.

As with any driving danger, the slower your car is moving, the more time you have to react. Likewise, wearing a seatbelt will reduce the injuries you’ll incur if you hit a deer as it does with any accident.

When driving on a multi-lane highway, try to stay in the lanes near the center to give you more time to react if a deer appears.

Using your high beams doesn’t just improve visibility, the light can reflect off of the deer’s eyes, making them visible at much longer distances. However, deer can become mesmerized by a steady light source. If a deer freezes in your path, try flashing your lights to get it back to its senses.

What to Do If a Collision is Inevitable

Deer can be jumpy, making them unpredictable, but this can be used to your advantage. Honking at a deer can startle it, causing it to leap out of your vehicle’s path.

If the deer still isn’t moving, your best bet is to keep going straight and using your brakes to reduce speed rather than trying to swerve out of the way. In studies of deer-related accidents, it has been found that damage caused by striking another car or running off the road when swerving to avoid a deer is much higher than hitting the deer directly.

Avoid contact with the deer – After an accident, the deer will be frightened and possibly injured. This means it will behave unpredictably, and you could be seriously harmed if the deer bucks or swings its antlers at you.

If possible, move your vehicle – Pull over to the side of the road and turn on the hazard lights to make it easy for traffic to avoid your car.

Contact the police – They’ll need to know if the accident is obstructing traffic, as well as the extent of injuries and damage. If the damage is severe enough, they’ll inspect the accident and file a report. Looking to get some deer meat out of the deal? You’ll need a permit to take the deer, which the police may be able to issue you on the spot.

Take photos – Use your smartphone to take pictures of the damage, the deer, the location and any injuries resulting from the crash. Be sure to note any deer hair or blood on your vehicle, as this can help prove damage was caused by the deer impact and not another collision.

Inspect your vehicle before leaving – Once the police are satisfied and you’ve gotten the evidence you need, look over your car and make sure it’s safe enough to make the drive home. Be especially aware of your car’s cooling system, since a major front-end impact has a good chance of damaging the radiator. If it’s leaking, your engine will overheat after running for a short time. When in doubt, call a tow truck.

If your car has had an untimely meeting with a deer, have it repaired at Merton Auto Body. We’re an I-CAR Gold Class certified shop with the equipment, training and technicians to fix the frame, body and glass on your vehicle right the first time. We even handle the insurance paperwork in-house so you can be back on the road in no time. Visit our collision repair page to find out more about our services.