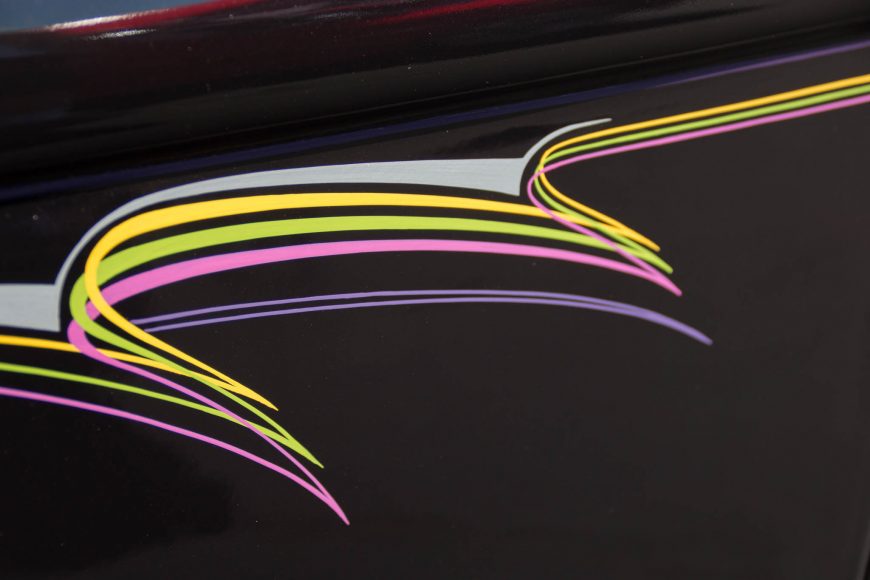 From hand-built coaches to modern custom cycles and cars, pinstripes have long been a styling staple. How did this style of ornamentation evolve, and how is it used today?

From Coaches to Cars

Pinstriping has been around for centuries, but it only made its way to coaches and carriages in the 19th century. Initially just simple lines, the pinstripe was revolutionized by Andrew Mack’s invention of the sword brush, which has a unique shape that allows the painter to vary the width of the stripe by changing the brush angle and pressure. His company went to work for Studebaker coaches in 1890, and, just 7 years later, Studebaker went into the car business, bringing Mack’s stripes with them.

Almost every automaker added their own pinstriping departments, but changes in styling and pressure to streamline production led to their phase out by the end of the 30s.

After WWII, people were ready to drive something fun, but parts were in short supply as factories converted their output away from wartime production. Motorcyclists bought up surplus military bikes and chopped off anything that wasn’t necessary to drop weight, creating the “chopper” look, while hot rodders got whatever parts they could from junkyards to build a vehicle that could go fast, leaving off hoods and fenders to expose mechanical components.

Likewise, customizers turned to whatever was available to add style to their rides, so an art form that only required a brush and some paint was a natural fit. Artists including Von Dutch, Ed “Big Daddy” Roth and Tommy “The Greek” Hrones used pinstriping to add graphics to their vehicles, starting a trend that caught on with this new group of customizers.

Pinstriping has returned to new cars as it gives a way for designers to add character lines without affecting aerodynamics, although these lines are now applied using vinyl tape instead of hand painting. Rolls Royce still employs a full time pinstriper to add lines and flourishes to tie their cars to the coach builders of the 1800s.

Pinstripes never fell out of favor with customizers with the style being applied to everything from lowriders to touring bikes. Artists have developed new techniques and styles, altering the shape of the basic sword brush to provide a wider range of shapes. Today, it’s common to see everything from abstract designs to faces painted using several contrasting colors across hoods and fenders. Basic lines are applied to add body lines like before, but they’re also found outlining chrome pieces and other small details.

How Pinstripes are Painted

The panel must be thoroughly cleaned to remove any dirt or wax to get solid contact between the top paint layer and the pinstripe paint. Fiberglass panels naturally have an electric charge that can disturb the paint as it’s being applied, but there are several ways to prevent this including the use of alcohol as part of the cleaning process.

The paint itself is blended just like regular automotive paint, using a combination of thinners and hardeners. While there are set formulations for spray-on paints based on weather conditions, the artist needs to adjust the mixture by feel, getting the right amount of drag to lay down a line that won’t drip while still being fluid enough to prevent skipping as the brush moves across the surface.

Even the most complex design is made up of three strokes: straight lines, C curves and S curves. With each stroke, the artist slides their hand down the side of the panel. By rolling and tilting the brush, they can move the brush left and right to create curves, and by varying the distance between the brush and the panel along with the pressure, they can alter the width of the line. It can take years of practice before the painter is able to draw a smooth line with an even point.

In the past, pinstripes were always the top layer, but they can be protected with a layer of clearcoat just like the rest of the paint. This is important for designs on the front of cars and the front fenders of motorcycles due to their exposure to rocks and other road debris.

Custom Pinstriping is Closer Than You Think

Merton Auto Body may be known for top quality collision repair, but we also provide services for custom cars and motorcycles including hand pinstriping. Whether you have a crusty rat rod or a bagger fresh off the showroom floor, we can help you get the custom look that you want.