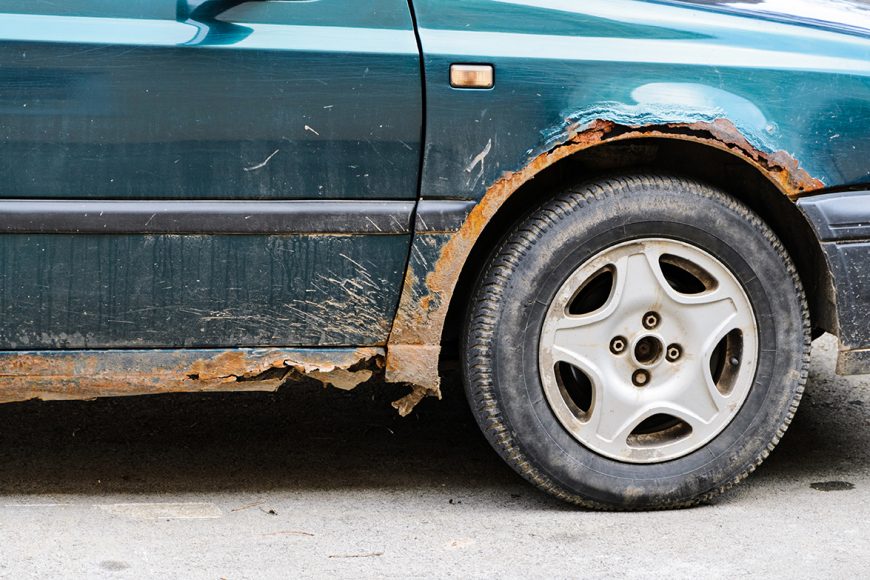 Let’s face it: a lot of the vehicles we drive up here aren’t going to go to the junkyard because they’re worn out, they’re going to be taken off the road because of rust. What is rust? What role does salt have in its formation? What can be done to prevent it?

When you’re talking about automobiles and machinery, rust is iron oxide, a molecule formed when iron and oxygen bond with each other. These two elements bond so easily that virtually all iron found in nature is some form of iron oxide. Iron is used directly in most engine blocks and exhaust manifolds, and it’s also the main ingredient in steel. That means most of the parts that make up a vehicle are susceptible to rusting.

How Does Rust Form?

Iron will react much faster with oxygen that is in water, whether from rain, a puddle, or moisture in the air. We live in a high humidity area, so rust forms more quickly than it would in the desert, even if the vehicle is kept in a garage.

The chemical reaction that bonds these two materials together is called electrolysis: the iron atoms and the oxygen’s atoms bond by swapping electrons. This can happen by itself with pure water coming in contact with iron, but it works better with impurities bringing along some ions to help speed up the reaction. As it so happens, if you add some free floating ions to water, it lowers that water’s freezing point. You can probably see where this is going: salt is spread onto roads to add ions to the ice, lowering the freezing point and turning it into ion-filled water. Melting the ice makes roads safer to drive on, but the resulting salt water gets on your car as you drive over the road and starts reacting with the metal. Rust forms, paint starts bubbling, and before long bits of your car’s fenders and frame start flaking off.

Iron isn’t the only metal that reacts with oxygen; it’s how it reacts that makes it such a problem. When aluminum and copper bond with oxygen, the resulting oxides form a protective layer around the exterior. When iron turns into iron oxide, it expands, loses strength, and flakes off. That leaves fresh metal to be exposed to the elements, causing a continual cycle of degradation.

Oxides aren’t all the same, either. Ever wonder why you’re supposed to use purified water in your car’s coolant system? It’s not just to reduce rust accelerating ions: contaminants commonly found in water can create iron hydroxide, a type of rust that breaks away more easily than other oxides, exposing more iron.

The expanding rust changes the shape of metal parts, whether it’s in a door panel, a hinge or a fuel line, inhibiting movement. As iron turns into rust, the part loses material and eventually strength, causing it to fail.

How Can Rust Be Prevented?

Stainless steel is rust resistant, particularly alloys that contain a large amount of chromium. This is why early Deloreans have a bare metal finish: their stainless steel body panels didn’t need the protection from a coat of paint. Although using it for body panels is prohibitively expensive, this metal does find use in other critical components like fuel lines. However, “rust resistant” does not mean “rust proof:” with enough exposure, these components can also react with oxygen and fail.

For everything else, there are coatings. If the paint on your vehicle remains intact, it creates a barrier between moisture and the iron in the steel. Rust proofing adds an extra coating inside and out to further protect the underlying metal.

What Can I Do to Protect My Car?

It starts with keeping your car clean. Salt water doesn’t react with metal easily when it’s frozen, but it will as soon as it melts. DIY car washes are better for this than automatic washes since you can use the wand to get into every nook and cranny between the body panels, as well as the undercarriage. When salt is being used on the roads, wash it off your car as often as possible.

Rust proofing will help protect your car, even after minor paint damage. This is best left to professionals since they have the best tools and techniques to ensure complete coverage. Even the smallest gap in the coating can give an opening to oxidation.

Keep an eye out for rust and paint bubbling, particularly along the corners of doors and fenders. The sooner you spot rust, the sooner you can get it into a body shop for repair, saving your car and cutting repair costs.

Merton Auto Body offers rust proofing services for cars and trucks of all ages and sizes. If you’re in the Lake Country area, stop by for a free estimate at W275 N6683 Moraine Dr. in Merton, WI or call (262) 538-1319 to make an appointment. You can trust their team of ASE and I-CAR Gold certified technicians to get the job done right, the first time.