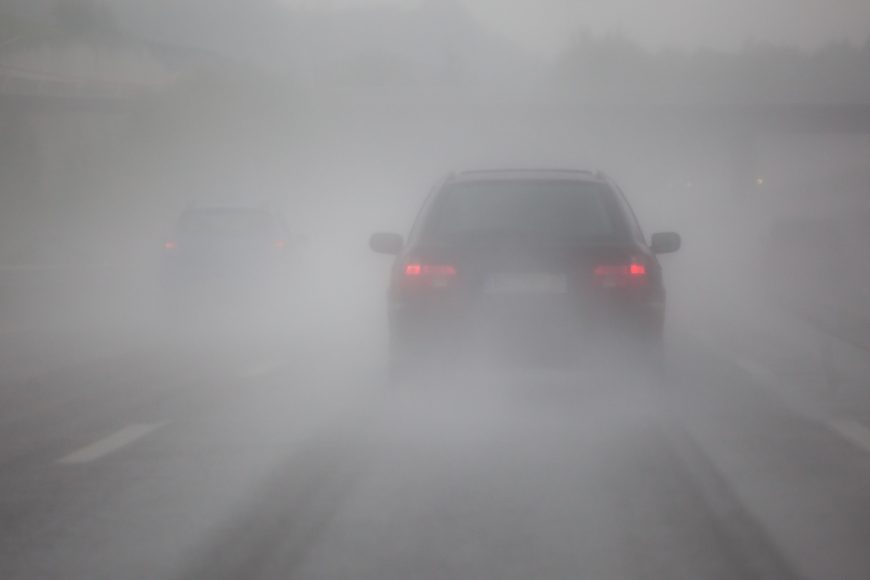 Safety Tips for Driving in Fog

When you’re driving down the interstate at 70 mph, your car is traveling over 100 feet per second. Even a light fog can limit your visibility to one or two seconds, which can greatly increase the chance of an accident. How can you drive in these conditions safely? Here’s what you need to know from using your lights to keeping your speed down.

The Causes and Effects of Fog

The warmer air is, the more moisture it can hold. When it mixes with cold air, the temperature drops and the moisture is released as small droplets of water, forming clouds. If this warm and cold air mixing happens near ground level, it becomes fog.

Since we’re close to Lake Michigan, we get a lot of advection fog. The water in the lake can absorb massive amounts of heat energy before it changes temperature, so it’s cooler than the surrounding air in the spring and summer and warmer than the air in the fall and winter. When air over the lake is blown over land, the temperature differences create fog. Summer fog is rare because the air is dry enough that it can still hold onto the moisture as temperatures drop, but any other time, fog can form whenever lake air is blown inland.

The small water droplets that make up fog reflect light, reducing visibility. If visibility is below a ¼ mile, the National Weather Service issues a Dense Fog Advisory. At that point, the time you have to react to visible objects is cut down to one to two seconds; for comparison, your car’s lights are designed to give you at least four seconds of reaction time when driving at night. If the mixed air is below freezing, the moisture can be supercooled, freezing on contact with bridges, roadways, and your car’s windshield.

Keep an Eye on Your Speed

Driving slower will help you react to obstacles when facing reduced visibility, but reduced visibility also changes your perception of speed, making you think you’re driving slower than you really are because you don’t see as many objects passing by. Keep an eye on your speedometer to make sure you’re moving at a speed that will give you time to react.

Fog is usually a few feet above the ground. This means your headlights will reflect off of the water vapor, but low-mounted fog lights won’t. Using both together will increase your visibility while making your vehicle more visible to oncoming traffic.

Don’t have fog lights? Use your low beams. The increased light of your car’s high beams will reflect more light, clouding your vision.

Use the Right-Side Lane Marker to Stay in the Lane

Focusing on the center line will cause you to drive toward it, potentially putting you in the path of oncoming vehicles. By lining your car up with the side lane marker, it will help keep you where you need to be.

While there won’t be any rain, fog can mist on the pavement, making it slick. Take the same care you would during a storm, compensating for reduced traction and longer stopping distances.

Never Stop in Your Lane

You may slow down to a crawl when visibility is non-existent, but vehicles behind you may not be able to react in time, resulting in a rear-end collision. If you need to stop, pull over and turn on your hazard lights. If you simply leave your lights on, a driver may think that you’re in the lane and try to follow you, causing them to drive off-road and into your vehicle.

Be Wary of Bridges and Overpasses

Bridges and overpasses freeze before roadways because every side is exposed to the wind and the concrete and steel they’re made of conducts heat better than the asphalt used for roadways. Add in some supercooled fog, and a layer of ice can form on these structures even when the rest of the road is dry.

When Accidents Happen, Bring Your Car to Merton

No matter how careful you drive, there’s always a chance that you’ll be involved in an accident. Merton Auto Body has been helping people with their cars for over 70 years, and as an I-CAR Gold Class certified shop, we’re able to offer the latest techniques in auto body repair so you can get back on the road knowing your car was fixed right the first time. We even have an Autobody Estimating Center to help you get work approved faster so you can have your car back sooner. To find out more, visit our website, MertonAuto.com