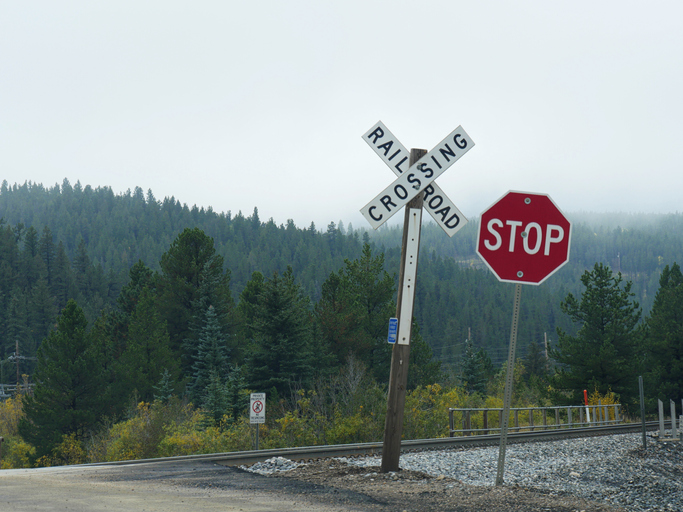 It’s easy to drive through railroad crossings without paying much attention to them, but each time we do so, we risk a serious, possibly fatal accident. Every three hours, a person or vehicle is struck by a train in the U.S. A collision with a train is 40 times more likely to result in death than a collision with another vehicle. In Wisconsin alone, there are over 4,000 railroad crossings and more than 3,000 miles of track. What can you do to reduce the risk of a train collision?

How Dangerous are Trains?

The average train weighs 200 tons and takes over a mile to make an emergency stop when traveling at 55 mph. Some trains weigh as much as 6,000 tons, and on long trains, it can take several seconds for the air system to activate the entire braking system, let alone stop the train. With so much inertia behind them, a train hitting a car has about the same effect as a car hitting a soda can. Even the safest vehicles on the road today will crumple when hit with that much force.

When is it Safe to Cross?

Don’t rely on hearing to tell if a train is nearby. The conductor won’t blow the horn at all intersections, and improvements in train and rail technology are making trains quieter. In most cases, you’ll be able to see a train long before you can hear it.

Freight trains don’t follow regular schedules. You should always expect a train at any track you cross, even if you’re on your regular commute and never seem to see a train.

The parallel tracks create an optical illusion, making trains appear smaller and slower than they actually are. If you see a train, wait for it to pass.

When crossing multiple tracks, don’t drive immediately after a train passes through. Leave enough time to check the other tracks for additional trains.

Slow down when you’re near crossings. One in four crashes between vehicles and trains involve a vehicle that drives into the side of the train. This mostly happens when the driver is going too fast for current weather conditions, whether it’s snowy, foggy or simply dark out.

Trains are 6 feet wider than the tracks, and loose straps can extend the train’s total width. For your safety, your vehicle should be at least 15 feet away from the tracks while you wait to cross.

If you have a manual transmission, don’t shift while you’re approaching or on a track. There’s always the chance you’ll stall the engine, leaving you in the path of the train.

If your car stalls on the tracks, get out and get away from the train and immediately dial 9-11 if you can. It’s better to lose your vehicle than lose your life.

Be aware that some vehicles, including buses and trucks carrying hazardous materials, are required to come to a full stop at all railroad crossings. Be prepared to slow down, even if there’s no train in sight.

What is an Exempt Crossing?

Some rail crossings have “EXEMPT” signs, which means that passenger vehicles and those with hazardous materials may cross without stopping first. This is usually due to the reduced rail traffic in these areas.

What Do I Do if Something is Wrong with the Crossing?

In Wisconsin, there are blue signs posted next to railroad crossings with contact information for the Office of the Commissioner of Railroads. If there’s a problem with the track, lighting or signage around a crossing, call the number on the sign.

When Accidents Happen, We Can Help

When you need collision repair, come to Merton Auto Body. We have the equipment and experienced technicians to repair any damage, from minor hail dents to frame damage. We offer free estimates, and our auto body estimation center can work directly with your insurance company to get work approved as soon as possible. Our shop is between highways 164 and 83 off of Silver Lake Drive. We’re a short drive or tow away whether you’re in Delafield, Pewaukee or North Lake.