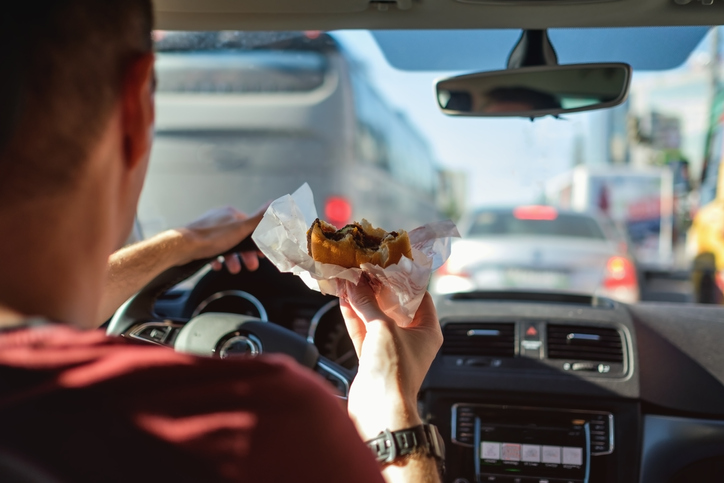 The Dangers of Eating and Driving

Distracted driving resulted in almost 3,500 accident deaths nationwide in 2015, and while texting gets most of the attention, most of us underestimate the impact eating and drinking has on our driving. In a survey of 1,000 drivers by ExxonMobile, 70% of drivers admitted to eating behind the wheel and 83% to drinking non-alcoholic beverages while behind the wheel. Here’s what you need to know to reduce your risk.

How Does Food Consumption Interfere with Driving?

Driving can be broken down into three task categories: visual, manual and cognitive. Food distracts from all three. Eating and drinking takes your eyes off the road, keeps your hands away from the controls and forces you to think about something other than driving. As a result, it has a major impact on responsiveness. A study by the University of Leeds found that on average eating decreased driver reaction speed by 44%, while drinking decreases a driver’s reaction time by 22%. To put that in perspective, the same study found that being intoxicated delayed response time by 12.5%.

In real-world conditions, food may not be as dangerous as alcohol when driving, but it does have a major impact on safety. Lytx, a company that specializes in improving driving safety for vehicle fleets, conducted a large-scale study of distracted driving. They found that drivers who are eating while driving are 3.6 times more likely to be involved in an accident than those who aren’t. This was the third largest increase in distracted driving accidents across the study behind using hands-free devices (4.6 times) and smartphones and tablets (4.7 times.) The National Highway Traffic Safety Administration (NHTSA) estimates eating and drinking increase the chance of crashes and near misses by 39%.

In 2012, Huron, South Dakota added a new law that fines drivers $100 for distracted driving that specifically names eating. Aside from this one local law, there isn’t any legislation in any state in the U.S. that restricts eating or drinking behind the wheel. At best, offenders can be ticketed for vague offenses like “distracted driving,” “reckless driving” and “not exercising due care.” While it’s easy to give a drunk driver a breathalyzer test, it’s harder to prove a driver was looking at their sandwich instead of the road.

Cross over into Canada, and it’s a different story. Last year, the Royal Canadian Mounted Police increased enforcement of distracted driving laws, singling out eating and driving. Depending on the province, offenders can be issued tickets over $400.

When studying distracted driving, the NHTSA identified 10 foods that are most likely to cause accidents:

There are three reasons these foods are dangerous:
– If it’s messy, dropping the food will force the driver to pull their focus away from driving to deal with the mess.
– Hot drinks are a danger directly from burns, and a spill is also a quick way to grab the driver’s attention.
– Greasy foods can make it hard to grip the steering wheel and other vehicle controls.

How Do I Reduce My Risk?

Eat in. Stopping for a few minutes lets you concentrate on your food, and it also helps you regain focus if you’re on a road trip.

If you must eat, avoid messy foods. A burrito or a wrap is much less likely to result in a distracting spill than a taco or sandwich. Likewise, skip filled donuts, nachos and other foods that have fillings and toppings that may fall in your lap, and forgo ketchup when you’re eating fries.

When Canada stepped up enforcement of their distracted driving laws, the RMPC suggested drivers only take a drink while sitting at a stop light. This lets you concentrate on your beverage when you don’t need to concentrate on traffic.

Have a passenger set up your food and beverage. By having them apply sauces and open packages, you’ll have fewer reasons to look away from the road.

If you must have a coffee on your morning drive, invest in a spill-proof container. Some places even offer a discount if you bring your own mug.

Accidents Happen – When They Do, Call Us

Merton Auto Body makes collision repair easy by offering the latest repair techniques and the experienced technicians to perform them so your car will look and drive like the accident never happened. Worried about your insurance? We have an on-staff appraiser who can get work approved so you’ll get your vehicle back sooner. If you’re in Pewaukee, Delafield, Harland, Oconomowoc or anywhere else in Lake Country or Waukesha County, we’re just a short drive or tow away.